We’ve been enjoying playing in our new cat garden, there’s so many things to explore and play with! I like standing on the plant pots as I can see a bit more when I’m higher up!

But my daddy wasn’t happy when Lula started taking more of an interest in the pots than she should 😆 :

Naughty girl! I don’t really think this type of behaviour is becoming for a Grand Premier girl – do you?!!

We’ve been having lots of fun in our new cat garden and we’ve even made a new friend! He’s a little odd as he’s purple and quite plastic-y but we still think he’s great fun to play with! Even Robbie has spent time playing with him….

Here’s some photos so you can see what we mean 🙂

All we need now is a name for him – any suggestions? 😆

Our cat enclosure is now almost complete! Just a few little bits of the fence to paint and mummy is also going to paint our cat house in a nice colour. But it’s now all safe and secure and planted with lots of grasses and flowers to attract bugs 🙂

So here’s the final instalment of our cat enclosure story!

Some of you may remember that Lula and I (being twins) celebrated our first birthday back in May. We had such a lovely day with so many well-wishes from our friends and lots of yummy food, that we decided that one birthday per year just isn’t enough!  Our mummy even made us an e-card which I’ve re-posted below for those of you who may not have seen it: 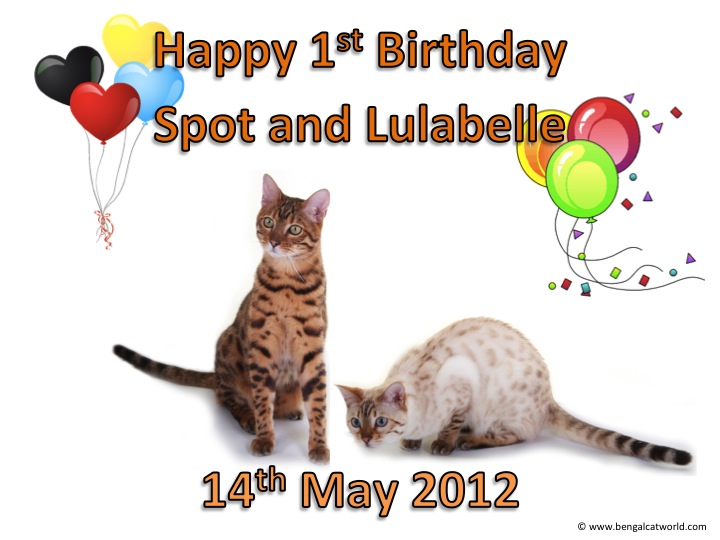 Hmmm… so you are probably wondering how I can claim it’s our birthday in August when we had our “official” birthday in May?

Well, you may know what the Queen of our land, Elizabeth II, has 2 birthdays per year… so we decided to better that and have four! Therefore, today is our 1¼ birthday! Yes, we are exactly 15 months old!

Mummy celebrated with us by giving us a special fish supper and we hope to have lots of chicken treats later too, just before we go to bed! We’ve also had lots of play with our favourite toys, including our feathers with our daddy, so all it leaves now is for us to work out how we can manage to fit even more birthdays in the year – any ideas my friends?

I’m very sorry, I’ve been quite naughty! I’ve not updated my page for ages…. does this look show my remorse do you think?

I have been really busy! I’ve been kind of addicted to the Olympics, it’s been great watching all the different sports! Lula has been to a cat show too, where she did very well, she got a Grand Premier certificate and won Best of Breed! Here she is with her rosettes…

And on top of that, we’ve also been busy helping our daddy build our new cat enclosure. You may remember that we need this because Lula is just that little bit too adventurous and wanders too far, so mummy and daddy want to keep a much closer eye on her. We’ll share pics of the enclosure once it’s done, but here’s a pic of me trying out some of the plants that are going to be put in there!

We all love having a nibble and a play in different grasses, as you can see here!

In fact, we have posted a video of us playing in the grasses on our YouTube channel! You can see it by either following the link to YouTube on the “slider” to the left of  your screen, or there is also a link on our “Videos” page which is on our photos tab – all our videos are on there 🙂

I promise I won’t leave it as long to speak to you next time!

So they’ve decided to build an enclosure for us which will also link to the garage and an indoor cat activity centre when finished!

Much of the outdoor bit will be covered in different plants so we will have lots of areas to play in and hide from each other and play games. We will also have plants that attract flies and bugs so we will be able to carry on playing our favourite hobby of fly-catching!

The plants have all been bought, so we’ve been checking them out! 🙂

We will keep you all updated of the progress of our enclosure and of course post more pics!

Speak to you soon!

I have been so busy lately, watching the Olympics on the TV… I can’t decide which is my favourite sport, there are so many to choose from! But on reflection I think things like football or tennis are very good – I have no idea of the rules, but it’s very exciting to chase the ball with my paws 🙂

We’ve also been having summer weather recently which has meant that we’ve had lots of opportunity to get outside and enjoy the garden without getting too wet!

One of our favourite haunts in the garden is around the fish pond, as you can see from these pics!

Our Harry cat doesn’t like the pond much, but we couldn’t leave him out! 🙂

I hope you’ve all had a nice weekend, the trouble with them is that they go so quickly, isn’t it? 🙂

We went to the Bengal Cat Club cat show yesterday, and if you read my Facebook page, you’ll know that we had a fantastic set of results!

Here’s how we did in detail! So I’ll start with me 🙂

The closing date for this show was BEFORE the last show we went to, so even though I now have enough Premier Certificates (PCs) to qualify as a Premier Cat. I was entered into the Premier Certificate class again… which I won!! So I now have 4 PCs 😆 Then in my three side classes, I got two first places and one second place, so pretty good results!

I had a great day… but Lula had an even better one! She was going for her 2nd Grand Premier Certificate, and was in a very tough class with lots of other great cats! So mummy was exceptionally proud when she won it and therefore her certificate! But then even better she beat all the other snow spotty Bengals to get Best of Breed! 😀 But then, and mummy couldn’t believe this, she then won Best Female Neuter in Show! This meant that she went to the Best in Show Pens for the overall judging!

She was then up against the Best Adult and the Best Kitten for Best in Show overall. This is where Lula didn’t win as the adult was awarded that title.

But what a fantastic day, and to do all that where there were so many lovely Bengals in the show meant that mummy was extremely proud 😀 😀

To top all of this, mummy won a bottle of wine in the raffle and has also found out today that one of our photos won in the photo competition and so will appear in the 2013 Bengal Cat Club calendar.

We are all so happy!

I hope you had as good a weekend as us 🙂

We’ve been watching the TV quite a lot tonight… they’re talking a lot about the Olympic Games as they finally begin tomorrow! I think this means there’ll be lots of sport for us to watch on the TV – we like watching sport and wildlife programmes, they’re our favourites 🙂

At least we’ll have nice weather for the games… or for the start of them at least! It’s been quite nice here over the last few days, just like summer should be in fact 😆 We like to cool down by sitting near the pond and watching the fish. Occasionally I even like to have a drink of vintage pond water 😀

Here’s some photos of us hanging out there:

We hope you all enjoy watching the Olympics!

Speak to you soon,

I hope you’re all enjoying your week and looking forward to the weekend, which isn’t too far away now!

I’m not sure if you’re aware, but there’s a couple of pages on Facebook that show cats looking out of, or into, windows! They seem to be very popular pages and we like to share photos with them 🙂

But we thought today we’d do our own little montage of various poses just of us looking out of a window. I hope you like them 😆

I hope you all enjoy your Friday! 🙂