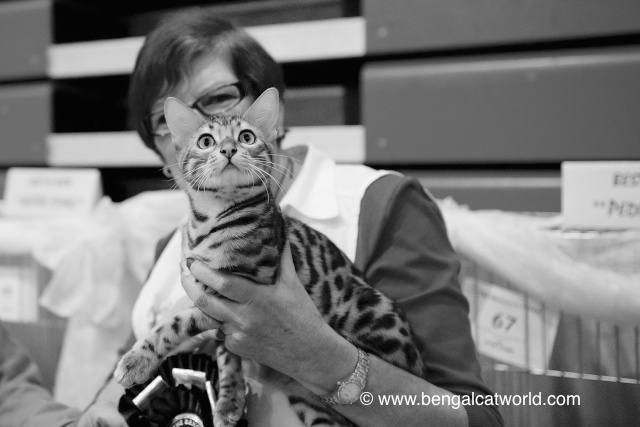 You may have seen from our Facebook page that Spike and Annie went to one of our favourite shows yesterday – the Bengal Cat Club show! And what a great day it was – here’s all the news you need to know 😆

It was a very early start as the show is many miles away from us – this is the furthest Annie and Spike have ever travelled but they were absolutely fine in their new large carrier that our mummy and daddy bought for them! They cuddled up together on their comfy blanket and had a nice catnap for most of the journey 🙂

Eventually they arrived at the show and passed vetting in with no problems. Daddy settled them in their pens and looked after them whilst mummy set up the stall. At 10.30, the kitty mums and dads all had to leave the show hall whilst morning judging takes place, but at 10.29 Spike decided that he would knock his water all over himself and all over his pen! What a silly boy! Luckily, a friend of my mummy’s saw this and came and told her, so it was a bit of a rush to get Spike dried out and the spare bedding put into the pen – always best to be prepared my friends! With that little drama over, all that the hoomins could do was sit and wait and hope for the best…

And it was definitely worth the wait!

Annie came first in her breed class, then got ‘Best in Class’ (which is the same as Best of Breed)

Then she came first in one of her side classes and second in the other two.

Spike had much larger classes than Annie.

He came first in his breed class, though was beaten to best of breed by a very lovely female Bengal kitten.

But the best was yet to come! Towards the end of the show, the Best in Show judging takes place and for the second show in a row, little Annie’s pen number was called as she had won ‘Best in Show Pedigree Pet’! So she was swept off to the special Best in Show pens where she was up against a very experienced and well-titled non-pedigree boy to compete for Overall Best in Show Household Pet!

It was very tense as the judge got them out of their pens in turn whilst she made up her mind… she said they were both super cats and it was very hard to make up her mind… but then she decided and went over to Annie’s pen and announced her as the winner of Overall Best Household Pet! Yay! How exciting! This is now two shows in a row where she has achieved this 🙂

So after all the excitement it was time for the long journey home… I was so pleased to see the babies when they got in! I ran around after them and had a bit of a sniff and a play and a cuddle! Of course we all had a special tea and then it was time for bed, a well earned rest for our two show stars 🙂

The next show – in 3 weeks time – is also one of our favourites, my friends! It’s the biggest one in the show calendar – the Supreme! Let’s hope we all enjoy that day as much as this one 🙂

This site uses Akismet to reduce spam. Learn how your comment data is processed.